Drum Roll please for The Saints who came marching in from Exeter and grabbed the trophy with an impressive 437 points. 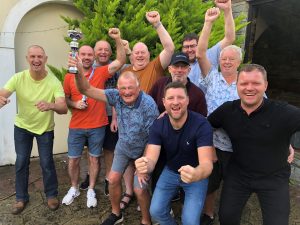 Saints’ Simon Albinson was the highest male scorer, meanwhile Beth Ricketts from their sister team the Sinners was highest female scorer with 68.  Sinners also claimed fourth place in the competition. Read all about it in the Exeter Daily Press

There was real drama too when the Ugandan Yankers and Norwood Arms A both finished on 411.  A tense bowl off saw Norwood snatch second place by 7 points to 6. After the Sinners in fourth place, came the Breakaways, followed by the Norwood Arms B, Gutterboys B and Norfolk ‘n’Chance who had travelled all the way from London for some skittles and sea air. 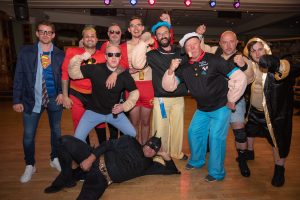 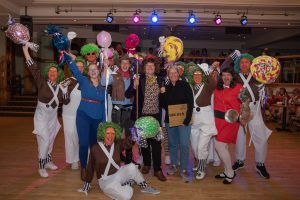 Russell with his Bosses & The Reckers skittles team

Also a big shout out to Russell Knight, Captain of the Reckers and the Bosses.  Russell had flown back especially from Cyprus for the weekend.  Now that’s devotion to duty.

There was some amazing dancing to our fabulous entertainers.  Who needs Bruno Mars when you can enjoy singer Richard Godefroy who gave his usual high octane performance.  Saturday night band Busta Groove got the whole hotel rocking from the moment they started.  As for the fancy dress, where do we start.  As usual there were some incredible outfits – are you among our pictures?  If not, why not post yours on our Facebook  and Instagram pages. 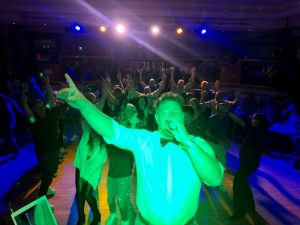 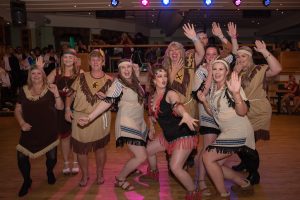 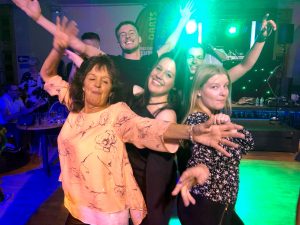 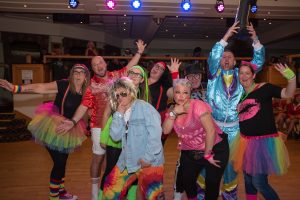 And finally a huge and heartfelt thank you to everyone for the incredible £611.19 raised for Cancer Research UK.  Read more about Rachel’s latest challenge in her November Madness blog in this months newsletter and visit her fundraising page to check out her progress.