Brace yourselves for lots more happy winners this month as well as just some of the amazing fancy dress outfits that have been paraded on our weekends.

First off, a big shout out to Melksham Sports for a great win at the Carlton Hotel, beating the Studley Dumplings from Chippenham.  Both teams went into this Wiltshire derby final unbeaten so we knew it was going to be a right old tussle.  The Dumplings won their very first title in the Serious About Events series back in December at the very same venue.  But this time they had to be content as runners-up.  Meanwhile Ady Skinner from Melksham Sports – remember that name – took the highest scoring man title with 62 points in the final.  As Captain Sue Pearce said, ‘those three spares in the final got us over the line.’

Below, the winners Melksham Sports with mascot Monkey and further below, as cell mates! 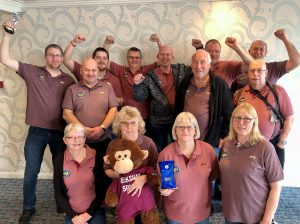 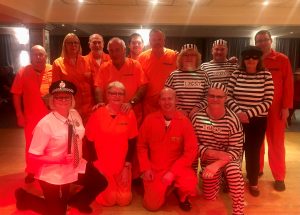 There were plenty of cracking outfits at the Saturday night party – including the Commercial Inn who came as 80s rock legends, in memory of their captain Derek Fear who passed away last year after a short battle with cancer.  Derek had been coming away with us for nearly 20 years and we all miss him so very much. The team donated their team subs of £200 towards our Cancer Research UK fund. 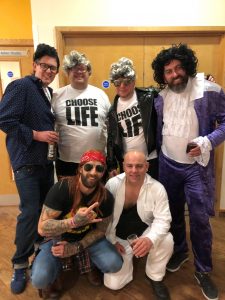 Then there were the Crackers who came as gnomes complete with a toadstool and a pond.  Genius!!  They chucked in their swear jar containing £37 proceeds from the coach journey into the CRUK funds.  They provided the surprise cabaret later on, by entertaining all of us with their antics, trying to stick their gnome ears back on with superglue and managing to have the glue tubes stuck to their fingers for several hours.  Always knew they had sticking power. 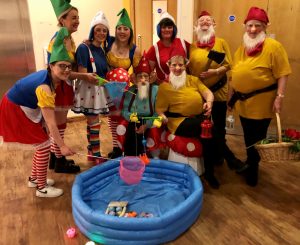 Over the weekend we raised at least £437.60 for CRUK and still counting, thanks to everyone’s generosity.  Fantastic effort and a big thank you!

Meanwhile at the Derwent Hotel in Torquay, right next door, we salute two worth winners from our recent weekends there.

First up, it’s the Vikings from Exeter who lifted the winners’ trophy with a resounding 435 points, beating a huge field of 23 other teams from Wales, Worcester, Gloucestershire, Wiltshire and Somerset.  It was soooo much more than a victory for the Vikings who have in the past entered the British Skittles Championships and never qualified for the finals which are held in Torquay.  So they had to book a weekend away with us to get to Torquay for a game of skittles.  And then of course they won it.  Well done lads.  Tenacity pays off!

The weekend raised a staggering £563.27 for CRUK so a big thank you to everyone!! 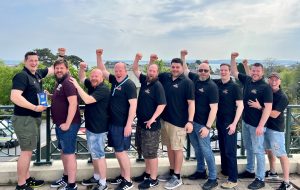 Our other recent Torquay winners really played the numbers game.  Three At A Time , who hail from Yeovil, were a player short, competing with 9 men for their weekend.  Undeterred they sailed to victory with 424 points, 33 ahead of runners up, the Original Sports from Melksham.

Ady Skinner from the Melksham team won the highest scoring man trophy – yes that’s him again!!  He’s going to need some serious shelving soon for all these trophies.  Well done yet again, Ady.

Below: The Magnificent Nine – aka Three at a Time 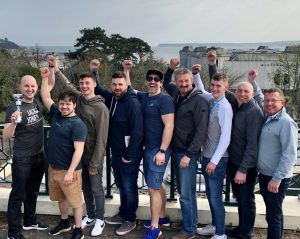