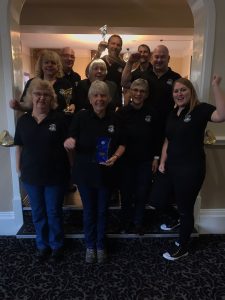 We can’t remember a weekend where one team took home ALL the trophies.  Yes repeat, that’s all of them.  We’re only surprised the coach taking them back to Wiltshire didn’t have to give its tyres an extra pump up with the weight of all that silverware.  So drumroll please for the Wiltshire Moonrakers who won the tournament trophy, along with highest men’s and women’s scorers.  Clean sweep then.

The team beat off opposition from 14 other teams who’d travelled from Wales, Bristol, Gloucestershire, Dorset, Wiltshire and Worcester to the Durley Dean Hotel in Bournemouth.  It was apparent by Saturday afternoon that the Wiltshire Moonrakers were owning it – clocking up a huge score of 475 and booking their place in the final.  The team continued their great form by clinching Sunday’s final with 456 points.  Runners up, the Exiles from Bristol scored 423, with Faraday from Swindon scoring 414 and Birdy’s Lot B on 380.

So what was the secret of their success?  According to team captain Elaine Lewis, it was all down to cocktails.  Or rather downing cocktails.  It seems most of the team got stuck into them, relaxed and just played a blinder.  They won their first game by 89 ins and a match on Saturday by 115 pins.

A magnificent weekend all round with some great music from Keedie and disco from MI Soundz.  If you and your team have never been, we’re back there again on March 18 for another great weekend of fun, music and skittles.  We just love Bournemouth!!