MORE THAN A CHIP ON HIS SHOULDER 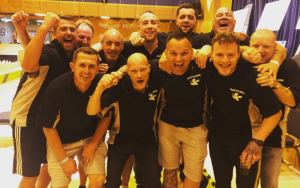 A big shout out please for James Rushton, our most celebrated male skittler in British Championships’ history so far. He captained the Highwaymen to victory three times and then helped the Rattler Boyz lift the coveted trophy. Now he’s acquired a new title that frankly, none of us would want to win. At the age of 41, he’s the youngest person in the country to have a reverse shoulder replacement operation. So what happened……

James, who’s a dad of three, trained as a goalkeeping coach initially to help his son Levi, aged 10 with his ‘keeper aspirations, then going on to coach semi pro team Pershore. Sadly one dive too many caused James to hit the deck, taking the nasty fall on his shoulder. He could hear a loud crack and realised it was serious.

‘At first everyone took the p*ss, including my wife Andrea,’ he said, ‘but when I was helped up and promptly fell down again, they called an ambulance. By then, nobody was laughing.’

Initially James was diagnosed with a broken arm and collar bone but a subsequent X-ray revealed his shoulder ball had not just snapped off his arm but was broken in two places. Operation 1 involved a shoulder replacement involving ten screws. Five months later and still in great pain, he couldn’t drive, cut his own food or wash his hair, let alone hug his kids. Another surgeon offered to perform Operation 2, a reverse shoulder replacement. All was well until a few days later, a blood clot caused the scar to burst open involving Operation 3.

Ok bad bits over now. Despite warnings to the contrary, he’s been able to ease back into playing golf and skittles. He’s back on the alleys with the Rattler Boyz helping them to win the Trebles Final and Doris Styles Cup in Worcester Friendly Skittles League Division 1. But he’s had to switch to an automatic car.

‘Andrea and the kids have been brilliant all the way through this,’ says James. ‘I’m back goal keeping but no more diving. I am now really good at catching the ball with one hand.’

James, we salute you.
Below James with Andrea, Levi and Maisie 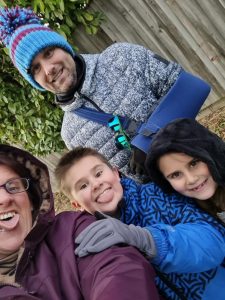