Rachel …. Skittles…. and her BIG Balls on the One Show 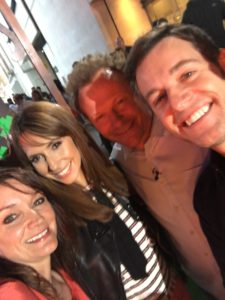 The boss of a Torquay based events company found herself starring in the BBC’s popular peak time The One Show last week. Rachel Bourke, managing director of Serious About Events whose offices are on Torquay harbourside, received an invitation to talk about skittles on the programme to the presenters Matt Baker and Alex Jones. https://www.youtube.com/watch?v=WtYVeWhbOds&feature=youtu.be

She and her team organise the annual British Skittles Championships whose grand finals take place at the Riviera International Conference Centre, plus they stage a series of skittle-themed weekends in hotels all over the Westcountry, taking away thousands of skittlers from all over the UK every year.‘They rang me up out of the blue, because they thought I was the Queen of Skittles,’ said Rachel.  ‘Well I guess we are the nearest thing to a national skittles organisation but I’m really not quite sure that makes me the Queen.

‘However, it was a great treat to appear on the show and give skittles the bigger profile it deserves.  I think Matt and Alex were quite surprised to hear that we’ve been running our skittles weekends for more than 20 years, and that the sport is still thriving.‘It is one of the few sports you can play with a pint of beer in one hand.  Many of our teams have been playing together for years and for generations.  It’s a great community thing for pubs and social clubs.  No wonder beer and skittles is mentioned in Tom Brown’s School Days.’

Theme of the One Show was the plight of Britain’s pubs with nearly thirty closing their doors for the last time every week.  One way landlords keep the beer flowing is to encourage skittles. The show focused on the number of pubs closing in Britain.  The studio was turned into the One Show Arms and Rachel found herself sharing the screen with Martin Shaw, Madness singer Suggs, actor Neil Stuke (Silent Witness, Dr Foster, Silk etc) and American folk rock band the Lumineers.

Outside in the piazza, hastily turned into a beer garden, a skittle alley had been rigged up where Rachel explained to Matt and Alex about the different types of pins and balls used in different parts of Britain. ‘They were particularly interested in the Dorset Flop,’ said Rachel.  ‘It’s a special way of getting the ball down the alley involving crouching down and flinging yourself horizontally onto the alley in the process.’

Roars of laughter went up when Rachel explained that they crouch down because they play with ‘heavier, bigger balls’.  Matt Baker was rendered speechless. Rachel then obliged with a demonstration and received a huge cheer from the audience and the celebrity guests who couldn’t wait to have a go themselves.

‘It was a really fab day meeting Matt and Alex and all the crew, but it was most definitely back to work with a vengeance,’ she said.  ‘The early rounds of the British championships begin this month and we have 150 teams and nearly five hundred matches to supervise.   Skittles is a full time business!’