Well, we were back at the Carlton Hotel in Torquay for another fabulous weekend in early December.  It was a very Christmassy affair with lots of elves, santas and Christmas trees amongst the fantastic fancy dress outfits on the Saturday party night..
Also we were able to witness history in the making.  The Studley Dumplings who have been finalists three times in the past twelve or so years, finally made it on to the podium to claim not only the winners’ trophy but also Stuart Allison claimed the best scoring man’s cup.  So a big cheer for the team from Chippenham.  They’re back at the Carlton in March so watch out – they might be going for a double now!

Captain Roy Wilkins modestly put it all down to luck.  But we think 399 points indicates a lot of skill and nerve.  The team are actually bowls players but they love a game of skittles as well.  Bowls, they say, is much more difficult.  Jury’s out on that…! 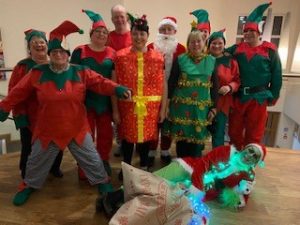 Elves on the shelves? That’s the Keepers team. 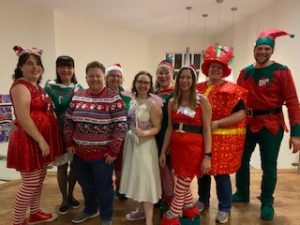 They wish it could be Christmas every day, that’s the Krankies who were runners up. 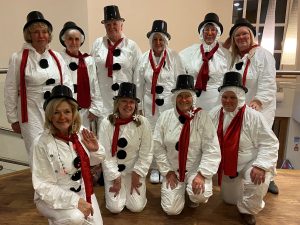 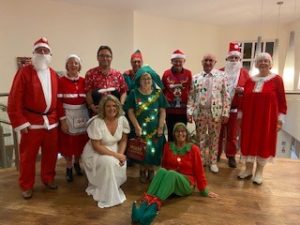 The Studley Dumplings in their Christmas finery.