She’s at it again

Rachel is in training for her challenge this year – the London Marathon in October.  For those of you who don’t know, she puts herself through hell every so often to raise money for Cancer Research UK.  And just to add a twist, she often picks up the baton on something she dreads such as heights, cycling, anything involving camping…….So past challenges have included a parachute jump, climbing to the summit of Mount Kilimanjaro, sitting in an ice bath for nearly half an hour, climbing the equivalent of Everest in the Lake District.  She even biked the 300 miles from London to Paris, hyperventilating all the way around the Arc de Triomphe.

It all began when she ran her first marathon in New York back in 2009.  Since then she’s raised well over £140,000  for CRUK.  So this year she decided to stick in the UK and do the London Marathon.  Training is now in earnest, not just running around Serious About events with a bucket raising money, but cycling, power walking, spinning and of course running.  The big date in her diary is Sunday October 2. 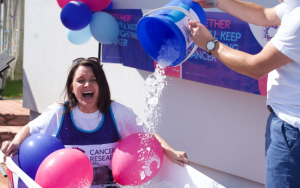