They might not have won the skittles competition at Sand Bay this month but when it comes to fundraising, the Welsh Wizards are top of the leaderboard. 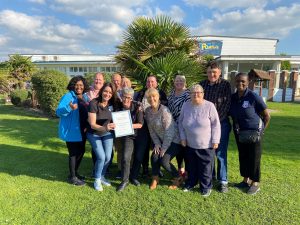 To mark their current figure of £66,500 towards Cancer Research UK, the team who hail from Barry in Wales, were presented with a certificate by Serious About Events boss Rachel Hosking at a skittles party weekend in Weston-Super-Mare.

Captain of the team Sarah Aston said she was first inspired by Rachel to raise money for the charity 15 years ago when the team went on their first skittles weekend.

‘Rachel had lost family members to cancer, ‘ said Sarah, ‘and her story really resonated with me.  We decided as a team that every year we too would raise money for CRUK.  And it went from there.  One year we managed £15,000, but of course since Covid it’s been much harder to get out and about with our buckets.’ 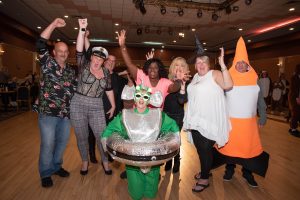 The Welsh Wizards come together as a team especially for the Serious About Events skittles tournament series.  The team mostly play for their respective teams at the Witchill Hotel in Barry.  This was their first time together since the pandemic.

‘I was really worried about coming to the weekend, as I have had to self isolate for the past 18 months due to my own health problems,’ said Sarah, ‘ but I felt really safe.  It was a fantastic weekend.  Such a brilliant way to get back to the new normal.  We lost our first game so we knew we were no longer really in the running, but we come for the fun rather than the competitive side anyway.’

Rachel will be shortly heading to the Lake District on her next charity challenge, Everest in the Lakes, you can follow her steps on her fundraising page.