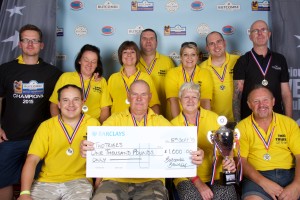 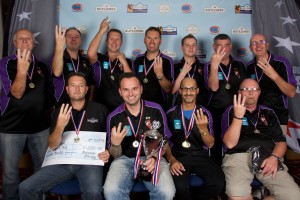 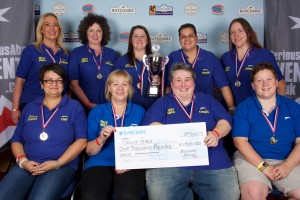 Thousands of skittlers compete each year to chase the dream of being part of the winning team, lifting the silverware and being crowned Butcombe British Skittles Champions.

Teams will play in regional group rounds and subsequent play-offs during the Spring/Summer to gain qualification to the Butcombe Skittles Championships Grand Finals which are held at the Riviera International Conference Centre, Torquay in September.

Winning teams will receive a share of the fantastic prize money up for grabs plus trophies and goodies sponsored by Butcombe Brewery.

An unforgettable day in the skittling calendar, the Grand Finals will witness the best UK skittles teams battling it out to take the title of the British Champions.

With its fantastic facilities the RICCwill become home for the weekend in September for over 800 skittlers, with great viewing of the skittles, well stocked bar featuring great specials, an array of options for food all day into the evening, it will ensure all are well fed and watered whilst competing or spectating at this weekend full of skittles.

The finals are a group format with teams in each event being drawn into groups of four and playing round robin during the day which provides a full day of skittling against teams from across the UK. The group winners will then proceed in a knockout to the finals.

The finals of each event are an amazing finale to the days skittling with teams being welcomed onto their alleys by all the razzamatazz that Grand Finalists deserve and once the British champions have been crowned the celebrations move to the dancefloor with an evening of fabulous live entertainment from live acts and disco guaranteed to keep the party swinging till the early hours!

A great way to kick off a magnificent weekend of skittles is by competing in the ever popular Singles & Pairs Tournament hosted by our Serious About Events team on the Friday . This tournament is a firm favourite with skittlers and has five events to choose from: Men’s and Ladies Singles, Men’s, Ladies and Mixed Pairs. With a full day of great skittling action on 16 skittle alleys the evening is all about celebrating the winners with first the presentation, then the Butcombe Championship Live Draw takes place to see who will be facing who in the first round. The whole event is finished off with a night of great music and disco till the early morning!

Why not make a complete weekend of skittles. Accommodation available for all participating players and spectators alike including two fabulously close affiliated hotels hotels The Derwent Hotel have a double or twin room for Friday and Saturday £93pp or The Cavendish Hotel have double or twin rooms for Friday and Saturday £65pp. RICC offering discounted rates. Many of the grand final teams book the affliciated hotels creating a great atmosphere over the morning pre-skittling fry up!

Everything you need to know about the Butcombe Championships will be right here.